A group of fourteen of us, visited this exhibition in the Schwann Building at Huddersfield University. We were offered welcome refreshments and heard an introduction to the museum by two volunteers. Opened in 2018, it is one of the 2 Holocaust museums in the UK (the other being in London.) Cooperation between the Holocaust Survivors Friendship Association and Huddersfield University, plus funding from the Lottery and other sources, led to this remarkable exhibition. It is by no means a ‘fun’ visit but it felt to be a great privilege to share in these experiences. 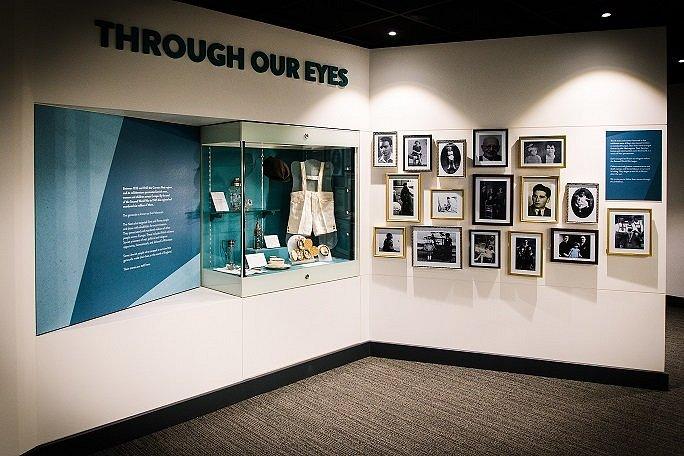 The presentation is excellent, the format is very accessible and not overpowering. Against the backdrop of the politics and situations in their homelands, the individual stories of 16 children and young people from Poland Hungary, Germany, France and Lithuania were told. They had arrived as refugees to the north of England, some survivors from concentration camps, some smuggled away by their families, some on the Kindertransports of 1938/39.

As we made our way around the exhibition we viewed explanatory text panels, touched screens of life stories, short videos, interactive displays, plus photographs and displays of artefacts and possessions. These included the yellow stars that Jews were obliged to wear in Nazi Germany. The displays were modern, instructive, and compelling. I did notice that as we went around there was very little conversation.  I think we were all so completely absorbed.

Some of the background information about conditions and treatment was very disturbing, but there was a positivity about this exhibition because it dealt with survivors who gained a new life locally and a chance of recovery. Elland people in particular will remember Lady Margaret Kagan, a Lithuanian who went into a concentration camp and eventually made a new life in the West Riding. It was heartening to read that the country of Denmark managed to evacuate nearly all its Jewish population to Sweden early on in the war. Also Albanian Muslims, including their civil authorities, refused to co-operate with the Nazis in any persecution of their Jewish population.

One lovely little story was of a young boy unable to speak any English who arrived by train in Leeds. His few possessions were put into left luggage and he was taken off by bus, ending up watching Leeds United playing Everton. The match was a draw, 1-1, but on that day he became a lifelong Leeds fan. Apparently when he was in his 90’s he was invited onto the pitch to meet all the team.

The exhibition finished with a short film and the final speaker said he was still alive only because he had been saved by the actions of a Gestapo Doctor. So there is hope in the darkest situations. I felt that despite the demonstrable horrors of the Holocaust there was a lack of bitterness in the exhibition. It is well worth a visit, open Monday – Thursday. Lots of information on the website, and appropriate for young people aged 14 and over. We intend to make sure our grandchildren go to see it. It will soon pass out of living memory and so these stories must be preserved.’